I’ve never worked with SCSM before, but a few weeks back I was asked to implement some automation processes using Microsoft Orchestrator (also a new product for me).

One of the jobs needed to add a user to a group, and you would expect something so simple would be easy. But after reading this guide, I ended up with this 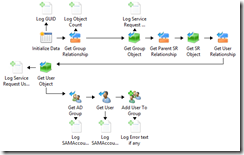 Are you freaking kidding me ? My life is just to short for that, so after a while I ended up with this instead 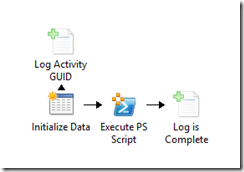 The main problem lies in the fact that you need to fetch a lot of related objects. You start by sending the GUID of the Automation job inside SCSM. You then get the related objects, and finally you fetch the real AD objects. The job will of course fail if the user is already member of the group, so feel free to add 5-10 more steps for check group members ships too. Gaaaahhh

As an added bonus you will also find some scripts for handling office 365 subscripts, users, licenses and management of SharePoint Online Service users in a federated environment. And notes about how to call Orchestrator run books from PowerShell completely dynamically with parameters.
(download link)