ID3206: A SignInResponse message may only redirect within the current web application:

I got a question in a remark on ADFS 2.0 and ASP.NET and wanted to do a post about it instead of trying to fit in code inside a remark too.

Sometimes you might see the above error. And I can understand why it can be frustrating at times, so ill try and clarify what it means.

You create a sign message and redirect the user to the ADFS/STS. The user logs in successfully and gets send back with a token, and now WIF on the webserver say’s “go away, you are trying to login with a token issued for another domain/application than me. 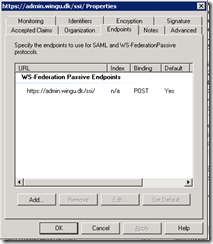 I have added the code I’m using now, and added a few comments. Should clear things up a bit.

SQL user does not use default schema

So I was troubleshooting an installation of SuperOffice Customer Service. When running the installer it would fail with an ODBC driver error saying something down the line of “’config’ object not found” and you could see it was doing a “select count(*) from config”

I jumped over to the SQL server and saw that the SuperOffice SQL user did not have crm7 schema set as default schema and was not owner. So I chanced that, and tried again. I would still failed. So I open a new query in Management studio and did a “select * from config” .. that should work, but didn’t, I would still get no such object.

after goggling a while I decided to do a alter user, so opened the “help” page for “alter user” and voila, after reading the page I suddenly knew what was wrong.

The person who had installed superoffice had added the SQL user crm7 to the sysadmin role, and as you can see, that will break the schema role assignment. After removing the user from sysadmin, everything worked again.